Make use of an abundance of feijoa fruits with this delicious apple and feijoa crumble. Top with yoghurt or a scoop of coconut ice cream for the most perfect warm dessert.

Autumn is feijoa season here in NZ, with the fruit available March through to June. And as you will know, it doesn’t just rain feijoas, it pours! Time to use up excess fruit in one of the most delicious recipes ever – apple and feijoa crumble with an almond, oat and chia topping.

Now, since a mature tree can easily yield up to 30kg of fruit per season, you may also like to try your hand at a few other feijoa recipes: I have some beaut ones for feijoa muffins, feijoa cake, and a feijoa chutney, but also think smoothies, juices, booch, jam, feijoa fizz, salsa and fritters… no single fruit should go to waste!

🍎Why you'll love this recipe

This feijoa and apple crumble recipe is a bit different to most – made without flour, butter and refined sugar, it’s entirely plant-based and can very easily be made gluten free.

🥣How to make apple and feijoa crumble

Step two. Peel your apples, then cut into thin slices. Steam them until *just* soft – I’d say a few minutes or so.

Step three. Cut and scoop out the flesh from your feijoa fruits. Roughly chop them or pulse them in a food processor.

This feijoa crumble requires a good kilo of whole fruit, ideally the net weight should be at least 550g of feijoa pulp.

Step four. Place apples and feijoas in a ceramic ovenproof dish, and toss to combine. I used a 25cm (9.8 inch) dish – perfect, but wouldn’t go any bigger.

Step five. To prepare the crumble topping, combine all dry ingredients in a large bowl, add a few tablespoons of the maple syrup, then use your hands to mix well.

Step six. Sprinkle the crumble over the fruit and flatten out the surface. Then cover with tin foil and bake for 15 minutes. At this point, you can remove the foil and bake a further 5 minutes to crisp up the topping until golden brown.

Ok, we’re done folks. Oh my gosh, that sweet heavenly aroma of freshly baked apple and feijoa crumble… does it get any better on a crisp Autumn evening?

We love it with a blob of vanilla coconut yoghurt and a drizzle of pure maple syrup. Divine.

What can I do with feijoa skins?

Can I compost feijoa skins? 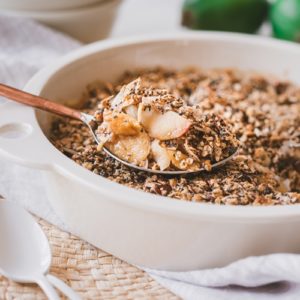 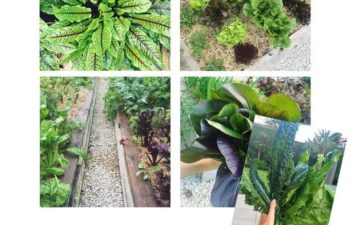 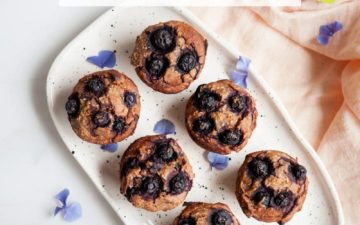 END_OF_DOCUMENT_TOKEN_TO_BE_REPLACED

This website uses cookies to improve your experience while you navigate through the website. Out of these cookies, the cookies that are categorized as necessary are stored on your browser as they are essential for the working of basic functionalities of the website. We also use third-party cookies that help us analyze and understand how you use this website. These cookies will be stored in your browser only with your consent. You also have the option to opt-out of these cookies. But opting out of some of these cookies may have an effect on your browsing experience.
Necessary Always Enabled
Necessary cookies are absolutely essential for the website to function properly. This category only includes cookies that ensures basic functionalities and security features of the website. These cookies do not store any personal information.
Non-necessary
Any cookies that may not be particularly necessary for the website to function and is used specifically to collect user personal data via analytics, ads, other embedded contents are termed as non-necessary cookies. It is mandatory to procure user consent prior to running these cookies on your website.
SAVE & ACCEPT
129 shares