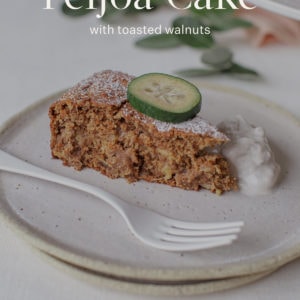 Heavenly feijoa cake – cinnamon spiced and filled with pulpy fruit and toasted walnuts. Enjoy a slice on a cosy Autumn afternoon with a big dollop of coconut yoghurt – bliss!

If you’re looking for the most delicious and moist feijoa cake recipe, you’ve found it here.

Feijoas AKA pineapple guavas are a bit of an enigma for most people outside of New Zealand – but we absolutely adore them here.

Once the season starts, most will be in a scramble to find creative ways to use up an abundance of the fresh fruits as Mother Nature more than provides.

So, if you’re in the mood for a spot of baking, this feijoa cake will more than satisfy. Serve with either a dusting of powdered sugar or a lashing of lemon icing.

🍂 If your feijoa tree is an over-achiever and you’ve gorged yourself silly on fruit and still have a pile to work through, try your hand at some of these great recipes: easy feijoa loaf, spiced feijoa muffins, apple and feijoa crumble, heavenly feijoa chutney or this chai spiced feijoa jam.

✨Why you'll love this recipe

Step one. First up – let’s toast those walnuts, or not, up to you. Scatter a cups' worth over a baking tray, and bake until they’ve browned up. Roughly chop.

Step two. Slice and scoop out the flesh from the feijoas, and roughly chop. Frozen fruit works well too.

Step four. Pour over the oat milk (or your choice of plant milk), olive oil and vanilla, then fold together to create a medium-density batter.

Step five. Lastly – add your feijoa pulp and nuts. Fold them through quickly – over-mixing will add air to the batter causing the feijoa cake to rise then collapse.

Step six. Spoon the cake mixture into the prepared tin. Bake for just 25 minutes, then very stealthily, whip open the over door and place foil over the top, to bake a further 10-15 minutes. This prevents the top from browning, but if you don’t mind a little crunch, don’t bother.

🍐Flavour variant - try pressing pear slices into the top of the feijoa cake batter before baking. It will look beautiful once cooked and save the need for icing!

Once the feijoa cake has baked, let it cool completely before removing it from the cake tin to serve. I know, this is so hard, the actual worst ever.

And that’s it guys! Such a lovely cake. Hope you enjoy as much as I did – next time I’ll be adding sultanas just to mix it up. 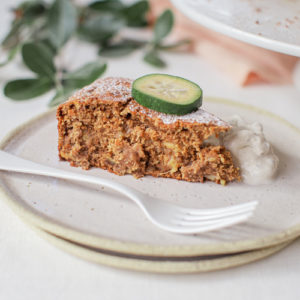 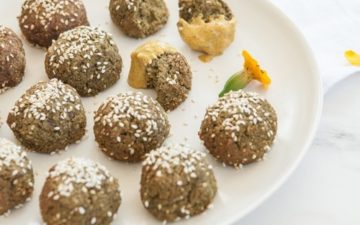 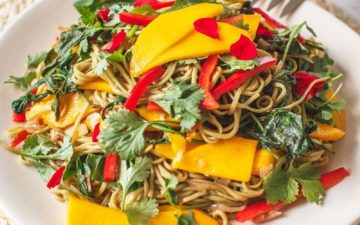 END_OF_DOCUMENT_TOKEN_TO_BE_REPLACED

This website uses cookies to improve your experience while you navigate through the website. Out of these cookies, the cookies that are categorized as necessary are stored on your browser as they are essential for the working of basic functionalities of the website. We also use third-party cookies that help us analyze and understand how you use this website. These cookies will be stored in your browser only with your consent. You also have the option to opt-out of these cookies. But opting out of some of these cookies may have an effect on your browsing experience.
Necessary Always Enabled
Necessary cookies are absolutely essential for the website to function properly. This category only includes cookies that ensures basic functionalities and security features of the website. These cookies do not store any personal information.
Non-necessary
Any cookies that may not be particularly necessary for the website to function and is used specifically to collect user personal data via analytics, ads, other embedded contents are termed as non-necessary cookies. It is mandatory to procure user consent prior to running these cookies on your website.
SAVE & ACCEPT
262 shares