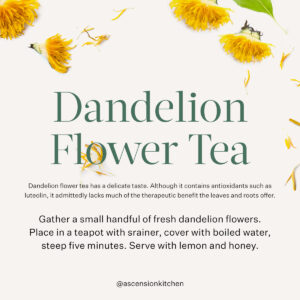 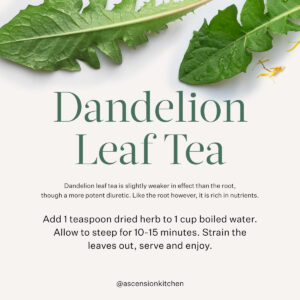 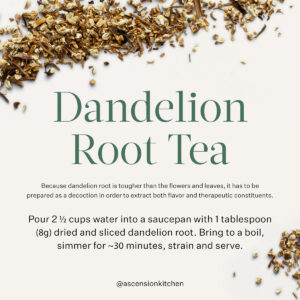 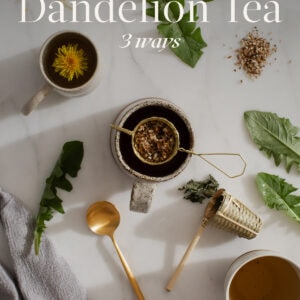 Those pesky dandelions in your yard are actually medicinal herbs worth getting to know. Here’s how to make dandelion tea three different ways, using the bright yellow flowers, dried leaves and roots.

🌼 Dandelion, Taraxacum officinale, grows wild in grasslands around the world. Often overlooked as a mere weed, this dynamic herb really can pack a therapeutic punch. Dandelion tea can be prepared from the dried roots or leaves. Roasting the root imparts a delicious coffee flavour, while the flower heads can also be used for a delicate taste, though aren’t often used medicinally. Here's how to make dandelion tea - three ways!

Dandelion is a highly nutritious, abundant and incredibly resilient plant from the Asteraceae family (which also includes mugwort, yarrow, chamomile, calendula and wormwood), that grows in sunny meadows and grasslands worldwide, though is native to both Eurasia and America.

Dandelion’s taproot runs deep into the earth, drawing an abundance of vitamins and minerals into its leaves. This makes them incredibly nourishing and is the reason dandelion was taken as a tonic by Native Americans [1].

Traditionally, the flower, leaves and roots have been used to treat digestive, liver and gallbladder complaints, skin inflammation and rheumatic conditions. The leaves in particular have a diuretic effect, while the roots act as a mild laxative.

Most of what we know on dandelion’s uses is due to empirical findings in traditional medicine, over hundreds and even thousands of years.

The whole plant is edible, and should be welcomed as a medicinal food, considering its rich nutrient profile. And of course – it makes a great herbal tea!

🦁 The name dandelion comes from the French "dent-de-lion" - it's so fun to say! Dent-de-lion means lion's teeth, and is a nod to the toothed appearance of the flower heads.

Every part of the dandelion is edible, from the flower heads with their sunny yellow petals, to the jagged leaves and roots. The flowers are often used to make wine, can be battered and fried into fritters, or infused in honey. You can even turn them into dandelion jelly!

The fresh greens make a lovely salad or pesto. The bitterness in the tender leaves is akin to arugula. You can also steep them in vinegar along with the flowers - the perfect menstruum for extracting its rich mineral content.

Dandelion roots can be chopped and added to soups, roasted to make a caffeine-free coffee substitute, or, as the flowers and leaves – brewed as a tea.

🏆 Dandelion leaves are packed with nutrition. In fact, they are considered a nutritional powerhouse, ranking highly on the list of top most nutrient dense foods for prevention of chronic illness, as compiled by Dr Jennifer Di Noia in a 2014 study published for the CDC here.

Dandelions are easy to identify with their toothed yellow flower heads, growing on a single, unbranched stem with a hollow centre and milky sap.

There may be several flowering stems per plant, with a rosette base. The leaves are hairless and deeply notched.

There are a few look-a-likes, such as hawk bit, cat’s ear, and wild lettuce, so be sure to ID correctly.

Really, dandelion flowers can be harvested year-round, though are most abundant in the spring or summer. Dandelion greens are best harvested in the early spring when they are the most tender, particularly if you’re intending on culinary use.

The roots are ideal to harvest in fall when their inulin content peaks (Romm et al, 2010), but like the flowers, can be pulled from the earth at any time you’re in need of them.

💁If wildcrafting, harvest from areas that haven’t been sprayed with chemicals or exposed to environmental pollutants.

Seek out plants that are robust with a good amount of leaves, then loosen the soil and dig out the long taproot. Separate the fresh roots from leaves, and hose them down to remove all dirt and debris.

The leaves and flower heads can be lightly washed in cool water and used fresh, or dried at low temperatures in a dehydrator for later use. The clean roots can be sliced into small pieces and used fresh, or roasted for a deeper flavor (more on how to do that, below).

The best way to store dandelion to protect the potency of its medicinal compounds is in a glass amber jar, in a dry place, out of direct sunlight.

If you can’t wildcraft, purchase the dried leaf and root from health food stores, or online, from reputable herb suppliers such as Mountain Rose Organics (US), Austral Herbs (Aus) or Cottage Hill Herbs (NZ).

Dandelion root is considered a remedy for the liver and digestive system, primarily.

Western herbalists employ the root to promote gastric secretions, gently support the liver, enhance detoxification, and promote the production of bile in the gallbladder, making it a stellar herb choice to aid the digestion of fatty, oily foods [2, 3].

For these actions, the root is generally prescribed as a tincture, though even sipping a small cup of dandelion tea before a meal, can act as an aperitif to get the digestive juices flowing.

It’s worth noting, the root is also a great source of the prebiotic fibre, inulin [4]. This means it further supports gut health by nourishing the friendly bacteria of the microbiome.

Dandelion leaf can be used to gently promote diuresis, easing fluid retention [5], and so has earned the name "pissenlit" (bedwetter) in French. And because dandelion is mineral rich, its diuretic effect won't deplete the body of potassium.

Dandelion also shines as an alterative - that is, a herb that helps open up channels of elimination, be it the liver, bowels, skin, kidneys, blood or lymph.

This makes dandelion an aid for both rheumatic and inflamed skin conditions, as it may help clear fluid build-up in the joints, and waste products from under the skin's surface.

Nutritionally speaking, dandelions are antioxidant rich, a great source of vitamin K, and a good source of vitamin A and vitamin C. They contain vitamin E, folate and other B group vitamins. They are also a source of minerals, including iron, calcium, magnesium and potassium [6].

The flowers aren’t often used in Western Herbalism, though do contain antioxidant properties.

A more comprehensive monograph on dandelion can be found here.

🌼How to make dandelion tea from the fresh flowers

Dandelion flower tea has a refreshing and delicate taste. Although it contains antioxidants such as luteolin [7], it admittedly lacks much of the therapeutic benefit the leaves and roots offer.

🌿How to make dandelion tea from the dried leaf

Dandelion leaf tea is slightly weaker in effect than the root, though a more potent diuretic.

☕How to make dandelion root tea

Because dandelion root is tougher than the flowers and leaves, it has to be prepared as a decoction in order to extract both flavor and therapeutic constituents. Dandelion root tea tastes earthy, slightly sweet and bitter.

Dandelion tea can have a striking bitterness to it (a good sign, therapeutically speaking!). To balance out the flavor, try serving with a little honey, or using it as part of a blend.

Another option is roasting dandelion root, which imparts an earthy, coffee-like flavor and is delicious served with steamed milk.

The best time to drink dandelion tea is during the day – simply due to its diuretic effect, otherwise it may well keep you up at night!

There is no standard dosage for dandelion, so you will come across differing guidelines depending on your source. The European Medicines Agency suggest the following;

Dandelion is a relatively safe plant with few warnings on possible side effects:

As always, this content is for informational purposes only. If you intend on working with dandelion therapeutically, do so safely and under the guidance of your qualified medical herbalist or other healthcare provider. Keep your doctor and pharmacist informed of your use of medicinal herbs, as they can interact with prescription drugs. 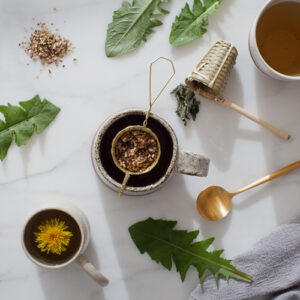 How to make dandelion tea (3 ways) 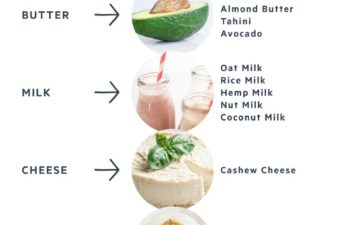 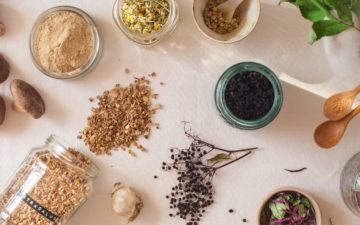 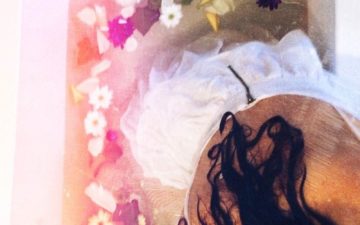 END_OF_DOCUMENT_TOKEN_TO_BE_REPLACED

This website uses cookies to improve your experience while you navigate through the website. Out of these cookies, the cookies that are categorized as necessary are stored on your browser as they are essential for the working of basic functionalities of the website. We also use third-party cookies that help us analyze and understand how you use this website. These cookies will be stored in your browser only with your consent. You also have the option to opt-out of these cookies. But opting out of some of these cookies may have an effect on your browsing experience.
Necessary Always Enabled
Necessary cookies are absolutely essential for the website to function properly. This category only includes cookies that ensures basic functionalities and security features of the website. These cookies do not store any personal information.
Non-necessary
Any cookies that may not be particularly necessary for the website to function and is used specifically to collect user personal data via analytics, ads, other embedded contents are termed as non-necessary cookies. It is mandatory to procure user consent prior to running these cookies on your website.
SAVE & ACCEPT
18 shares