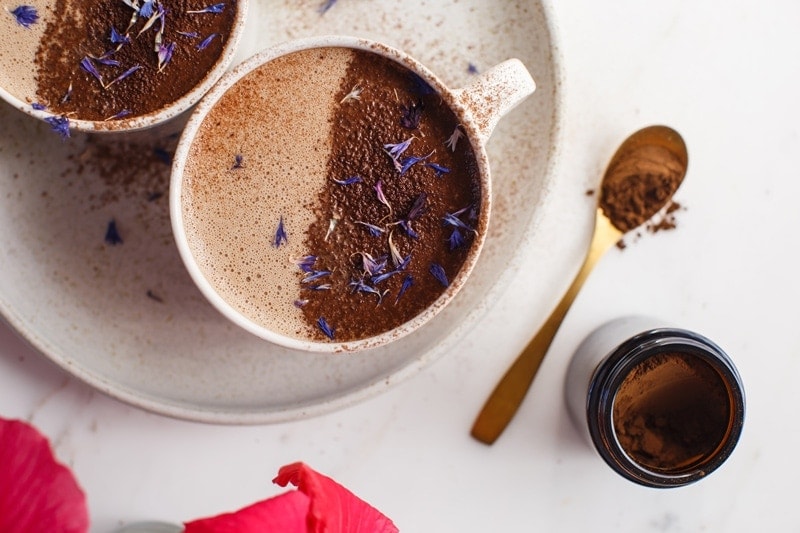 We're making a delicious, creamy 'shroom brew today guys! I've always wanted to try out a Chaga Mushroom Hot Chocolate - what a fun way to incorporate a wonderful functional food into your day with some pretty impressive health benefits.

My suggestion - jump on down to the recipe, make yourself a brew, then pop back up to read all about the benefits. Exciting stuff!

Chaga is not actually a mushroom, but a parasitic fungus that grows on Birch trees throughout the northern hemisphere.

It grows like a big black mass on the trunk. Chaga must be collected from mature Birch trees – living or freshly cut, as the active constituents in are destroyed in those harvested from dry standing and fallen trees {1}.

Chaga has been used in Siberian and Baltic medicine for centuries, for tuberculosis, diabetes, stomach ulcers, gastritis, intestinal worms and polyps, as a cancer preventative and anti-tumour agent, to modulate the immune system, reduce inflammation, and to protect both liver and heart {3}.

Traditionally, chaga has been taken as an infusion (a hot water extract) using a small piece of mushroom (1-2g), or a tablespoon of crushed mushroom, three times a day {4}.

The Nobel Prize winning Russian novelist Alexandre Soljénitsyne, referenced chaga’s use in Siberian gulags in his novel, The Cancer Ward.

Health authorities associated the widespread consumption of chaga infusion with a decreased incidence in cancer at the time. It was finally officially included in the Soviet Pharmacopeia in 1955.

Recently, scientific investigations have supported traditional use with evidence of its ability to exert a range of therapeutic effects – from antioxidant support, to immune and inflammatory modulation, to anti-tumour actions. 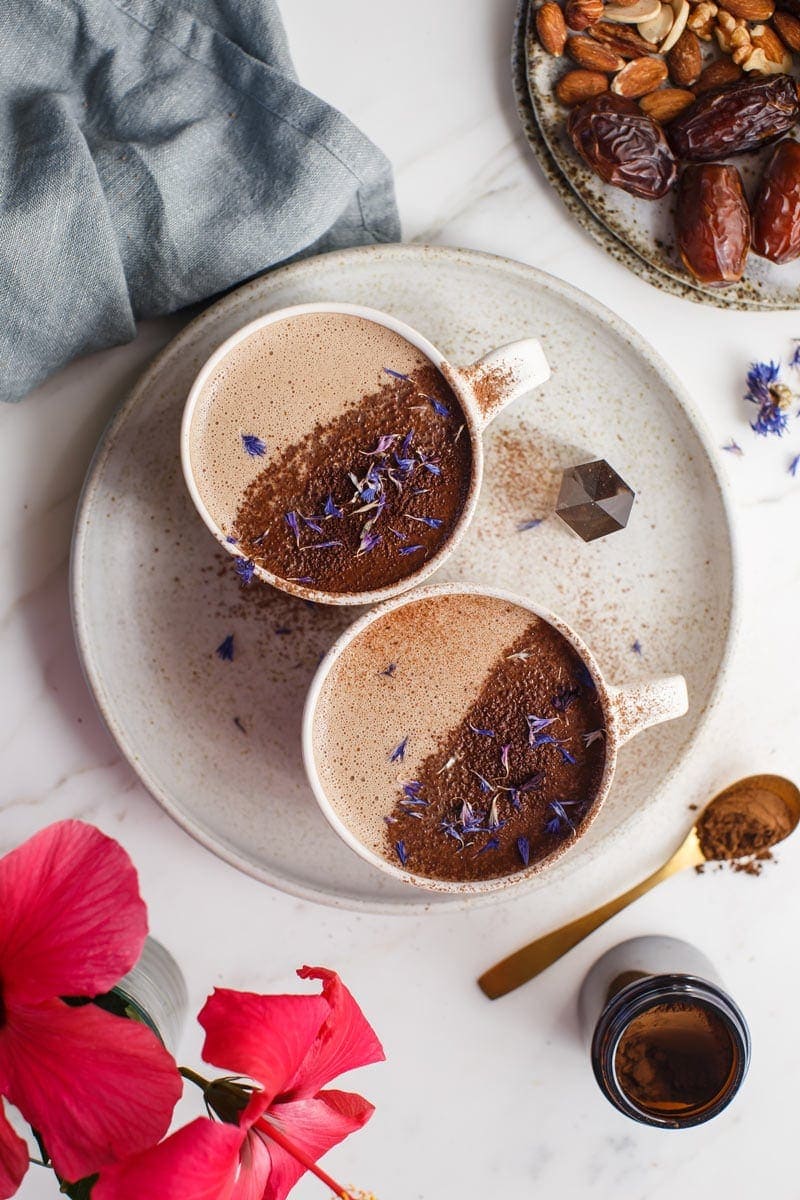 Chaga mushroom has an array of biologically active constituents. These include polysaccharides (particularly, beta-glucan), triterpenes, polyphenols, betulin and betulinic acid (the latter are derived from the host birch tree).

To date, a search of PubMed reveals there are 192 published studies on chaga. All of which are either in vitro or animal studies – there are no human clinical trials as of yet, that I can see.

This isn’t unusual in the world of science – it is very rare that there is funding available for research on herbs (or fungi) that ultimately can’t be patented.

A lack of scientific evidence however does not by any means discredit a long history of efficacious empirical use.

As Shikov et al. state so eloquently – herbal and natural remedies are the product of hundreds of years of careful observation of their therapeutic effects and risks; thus their properties are quite well known.

Regardless, in the studies we do have – it is clear to see there is emerging evidence to validate traditional use. Here is a brief summary…

Extracts of chaga mushroom have been found to exert super-oxide dismutase (SOD) like activity. SOD is an enzyme your body produces, to neutralise the damage done to cells by superoxide radicals.

Chaga extracts have also been shown to be as protective as catalase against hydrogen peroxide – another, more potent oxidiser, produced by reactions in the body {5, 6}.

This protective effect has been found in cell cultures from patients with inflammatory bowel disease {7}, and in pancreatic beta-cells with hydrogen peroxide induced oxidative damage {8}. This demonstrates it could have potential in protecting against inflammatory disorders and diabetes.

To elaborate a little on the significance of this - both SOD and catalase are known as a primary antioxidants as they sit at the top of the ‘antioxidant pyramid’ (yes, there’s such a thing!).

As enzymes, they can literally quench billions of free radicals per minute, over the span of several days before exhausting themselves.

In comparison, dietary antioxidants – known as secondary antioxidants - such as vitamins A, C and E, carotenoids and flavonoids, can only quench one free radical at a time, so are rapidly used up.

The diagram embedded in this article provides the perfect illustration.

An excess of oxidising agents such as hydrogen peroxide, relative to antioxidants, lead to oxidative damage to DNA, proteins and other macromolecules – this plays a significant role in the development of many diseases, age-related illnesses and cancers.

So, to think chaga is potentially on par with the antioxidant big guns is quite exciting! 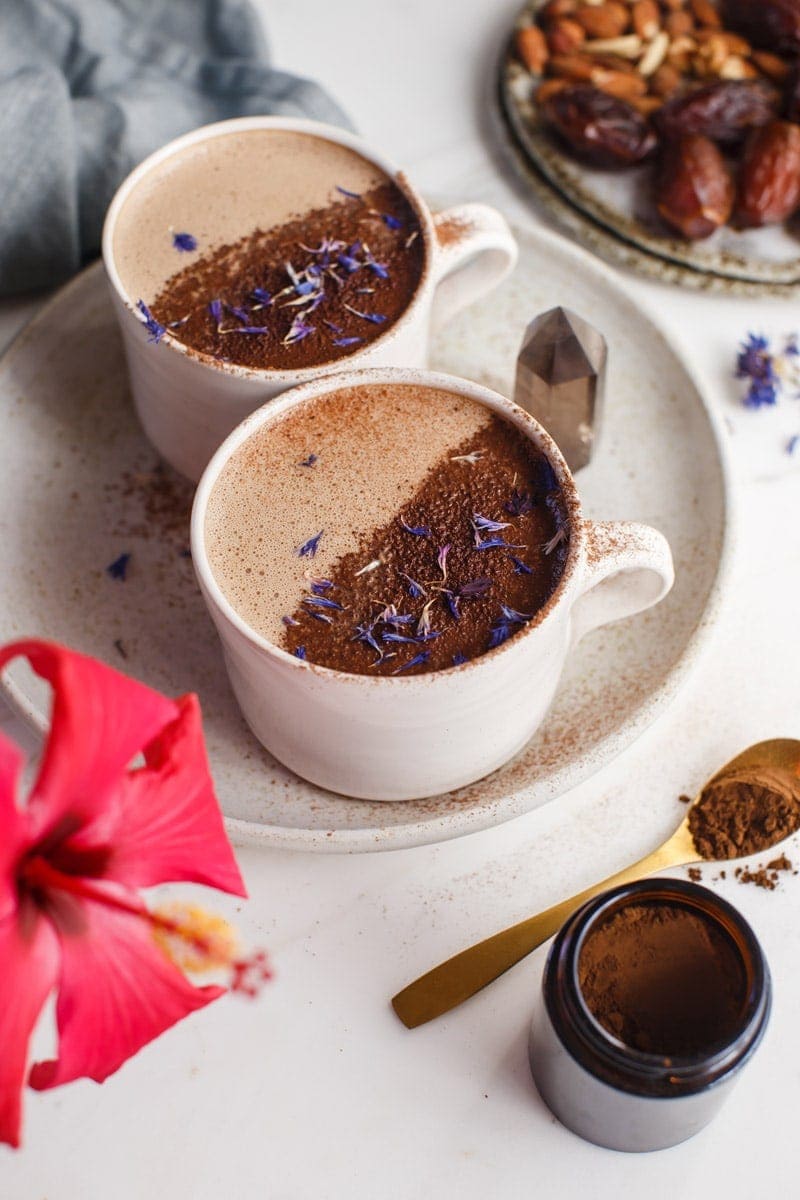 Medicinal mushrooms have an immune-modulatory effect on the immune system. This means they can both stimulate and inhibit depending on conditions.

The type of extraction method seems to influence the effect on the immune system. Water based extracts have been found to activate immune cells, whereas ethanol extracts inhibit {9}. This is due to the differing solubility of the constituents in the solvent.

One study found an immune-stimulatory effect on bone marrow cells from immunosuppressed mice using a water extract {10}. Another similarly provided evidence (in vitro and in vivo) that polysaccharides isolated from chaga mushroom have a strong stimulatory effect on cells of the immune system {11}.

Chaga and other medicinal mushrooms may therefore be helpful in supporting the immune system across quite a spectrum – from the common cold, to more serious infections.

One study took a water extract of chaga, and examined its anti-viral effects against hepatitis C in cell cultures. The authors found it reduced the viral infective properties 100-fold within 10 minutes {12}. Similarly, it has shown efficacy against HIV virus in cell cultures {13}.

Chaga mushroom has been shown to inhibit growth and proliferation of various cancers in vitro (lung cancer, cervical cancer, human hepatoma) {14, 15, 16}. A few studies have found anticancer effects in rats.

Anticancer effects may be due to its antioxidant effects, its cytoprotective effects, ability to induce cell death in tumor cells, or modulate the immune system.

There are currently several different anti-tumor drugs on the market at present, in Japan, China, Russia and Korea, developed from the mycelium and fruiting bodies of various medicinal mushrooms, including chaga {17}.

Polysaccharides isolated from chaga mushroom were found to promote stamina and alleviate fatigue in some incredibly stressed mice (poor darlings), with no toxic effect on major organs {18}.

Chaga, like other medicinal mushrooms (such as reishi, cordyceps, lion’s mane and shiitake) is classed as an adaptogen. 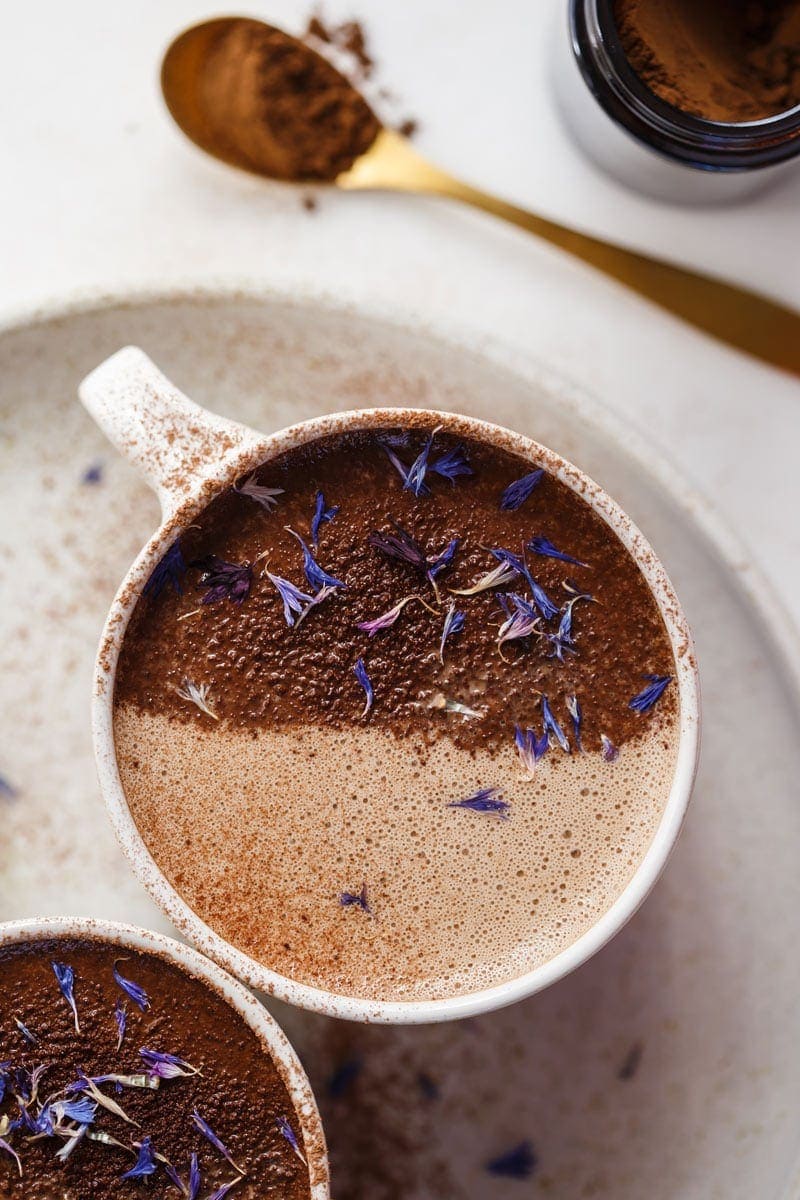 I can’t tell you if chaga is right for you – please consult with your healthcare provider if you are pregnant, breastfeeding, diabetic or have a serious health condition, are on blood thinners or other medications. Always follow the dosage guidelines.

And now for the fun part! Having given up coffee in the new year, I’d been really missing that comforting morning drink. This has been a delightful substitute. My morning rituals are complete again!

It couldn’t be easier to make, either. Simply make a black tea with chaga powder and hot water, then add to a blender with coconut milk, cacao and raw honey – blend and enjoy. It will froth up café style which is quite lovely.

Hot tip – my partner loves his with a dash of vanilla for a flavour twist.

If you make and enjoy this recipe, please leave a rating below. And better yet – leave me a comment to tell me how you got on, or just say hi – I LOVE hearing from you. Follow me on Instagram, Facebook or Pinterest to see more of my everyday recipes and wellness tips.

If you’d like to chat with me about essential oils, or book in a class, you can do that here. If you’re after a Naturopathic consult, read more here. 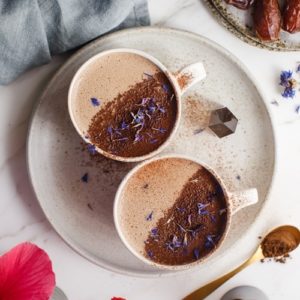 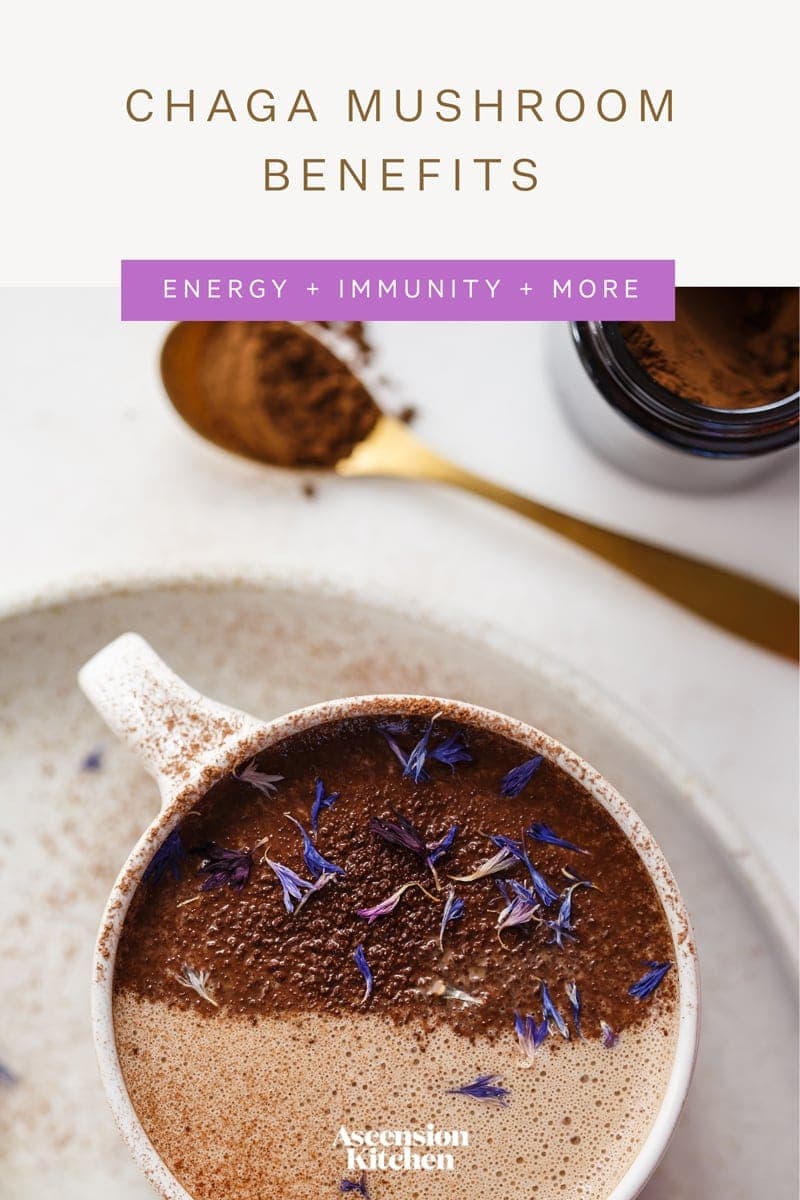 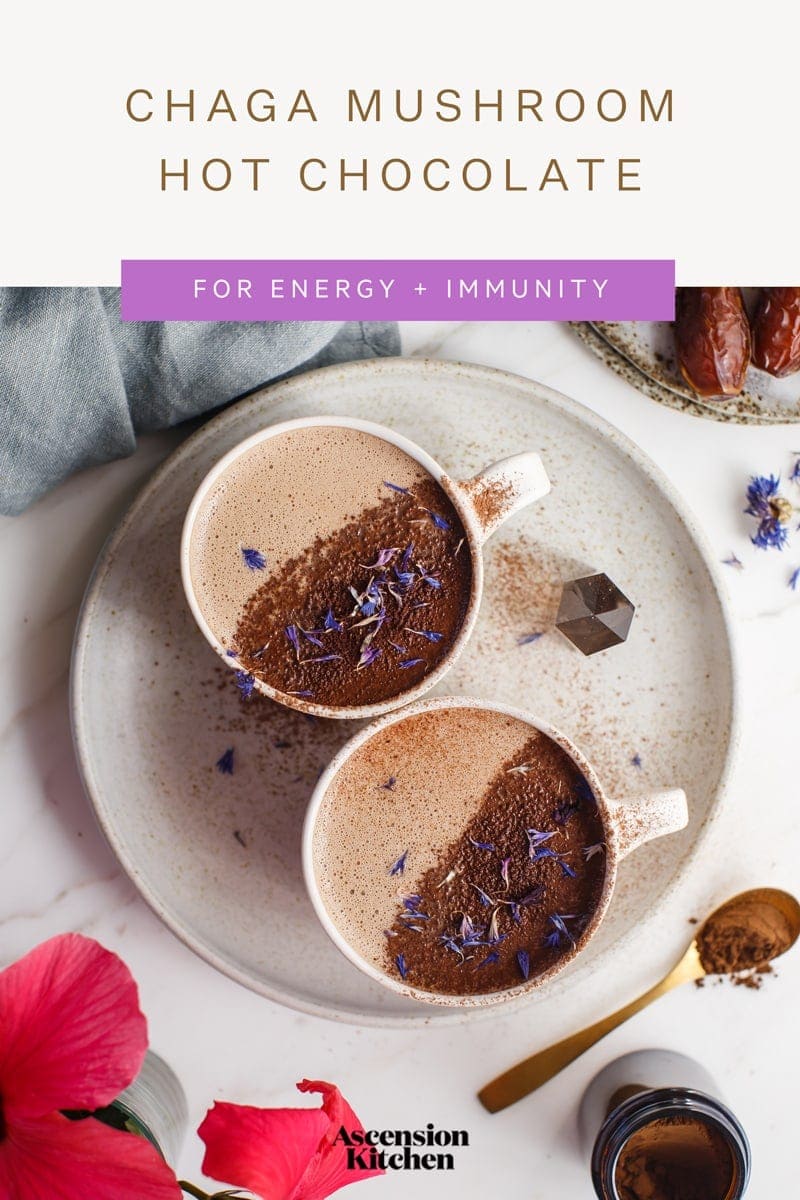 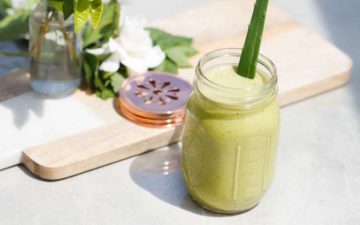 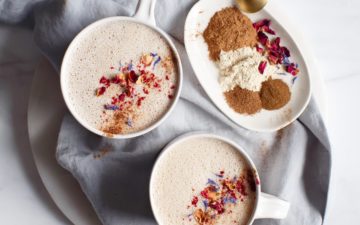 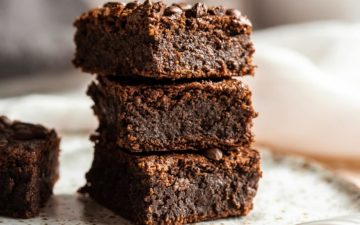 END_OF_DOCUMENT_TOKEN_TO_BE_REPLACED

This website uses cookies to improve your experience while you navigate through the website. Out of these cookies, the cookies that are categorized as necessary are stored on your browser as they are essential for the working of basic functionalities of the website. We also use third-party cookies that help us analyze and understand how you use this website. These cookies will be stored in your browser only with your consent. You also have the option to opt-out of these cookies. But opting out of some of these cookies may have an effect on your browsing experience.
Necessary Always Enabled
Necessary cookies are absolutely essential for the website to function properly. This category only includes cookies that ensures basic functionalities and security features of the website. These cookies do not store any personal information.
Non-necessary
Any cookies that may not be particularly necessary for the website to function and is used specifically to collect user personal data via analytics, ads, other embedded contents are termed as non-necessary cookies. It is mandatory to procure user consent prior to running these cookies on your website.
SAVE & ACCEPT
1.2K shares