Healthy raw hot cross buns - they're soft and springy and entirely grain and refined sugar free. The lemony-cashew cream 'cross' tops it off. You will need a dehydrator for this recipe. 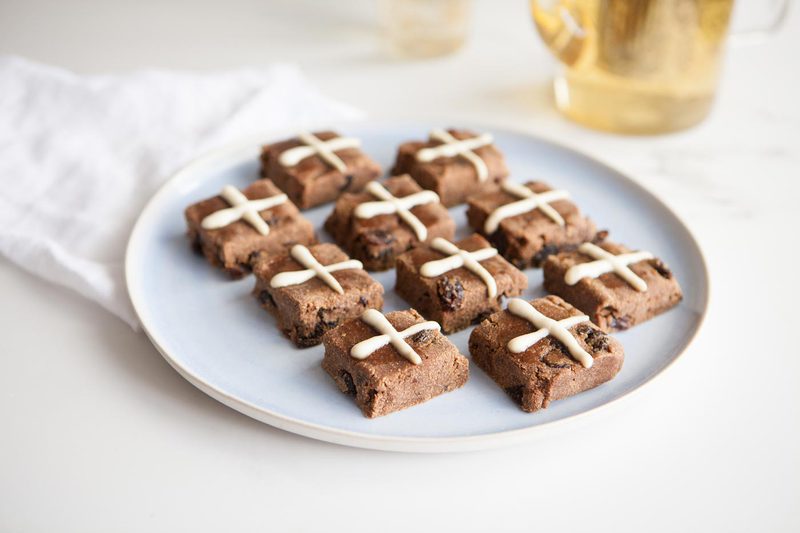 Ok you guys. Raw Hot Cross Buns. Eeeeep!! But first, I am so thankful that I am a grown up now, and can make and enjoy my own Easter treats and meals.

I think I may have wanted to be a Marine Biologist at that stage, and was playing with the idea of vegetarianism – though strictly forbidden by my parents, who thought I simply ‘wouldn’t grow’.

At that time, Easter was full of dread. Being a Croatian family, we would have a big fat family dinner on the Good Friday, sitting down to a meal of Nana’s traditional fish head soup. Oh my goodness. Could there be a worse thing in the culinary world? An actual entire fish head, glazed pearly eyes, floating in a broth of smelly liquid, soggy rice floating at the surface (no offence, my dear, sweet Nana).

This is entirely subjective of course, because the rest of the family licked their bowls clean each year. The room would be silent, save for their slurps and the clinks of spoon on ceramic bowls (and my whining, of course).

To me however, it was just the worst thing ever. The fish head soup tradition has continued to present day, but luckily, I no longer have to endure it. I’m quite happy to fix myself some fresh salad and tempeh while the family chow on down. Easter is so amazing now! And – of course – I totally get to indulge in all kinds of healthy plant-based treats.

Which brings me back to today’s recipe. 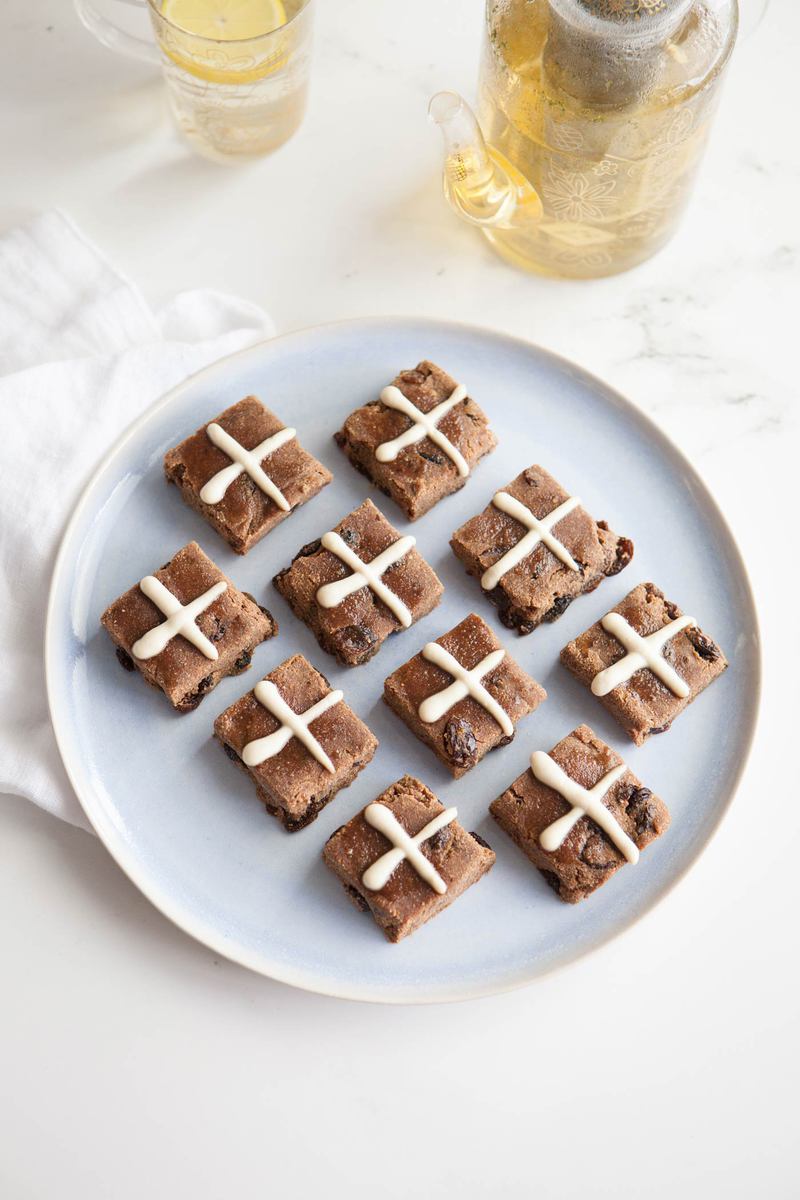 Last year I made some delicious (cooked) Hot Cross Buns, and this year I decided to try a raw version. It’s always a challenge recreating breads, raw foods style, as you can never quite get that soft springy-ness. However, I reckon these are pretty close. It’s actually the combination of almond meal, psyllium husks, nut milk and grated apple that gives the winning texture. I avoided using flax meal for this recipe, as the flax does have quite a distinct taste.

A note on psyllium husks:

Psyllium seed husks come from the Plantago ovato plant and are commonly used as a bulk laxative due to their high fibre content. In fact, they’re also affectionately known as ‘Nature’s intestinal broom’. Upon contact with water they swell and form a mucilaginous gel, adding bulk to your poop and facilitating its passage through the colon. This unique swelling ability is pretty handy in cooking (or un-cooking) as it makes for a fabulous binder. The only caveat – you don’t want to go overboard with it as it may have the opposite effect and get stuck.

As a general rule of thumb, you want to be having lots of water if you’re taking it therapeutically, and you only want to use just a little if you’re using it in a recipe – and, ensure that recipe includes some liquids. In these Raw Hot Cross Buns, the amount of psyllium husks comes to approximately 25g (1/4 cup), which equates to about 1.5g per serve. A therapeutic dose to help the bowels move would be closer to 10g daily in divided doses [1]. 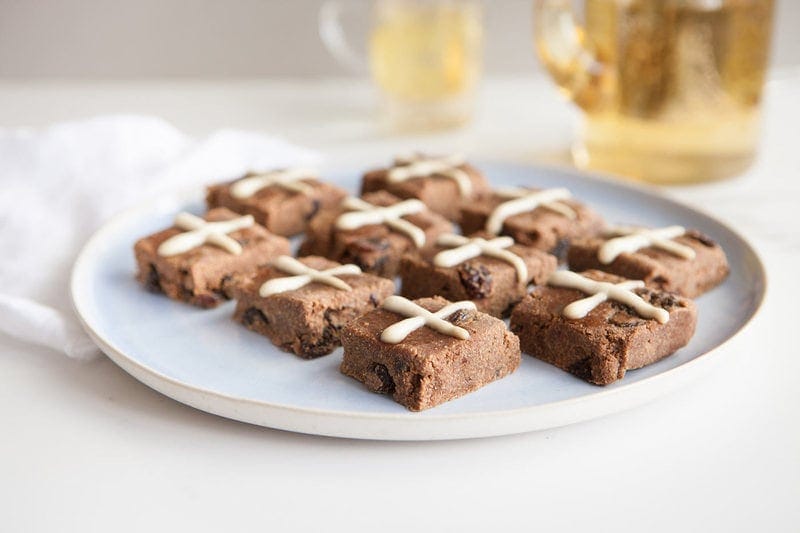 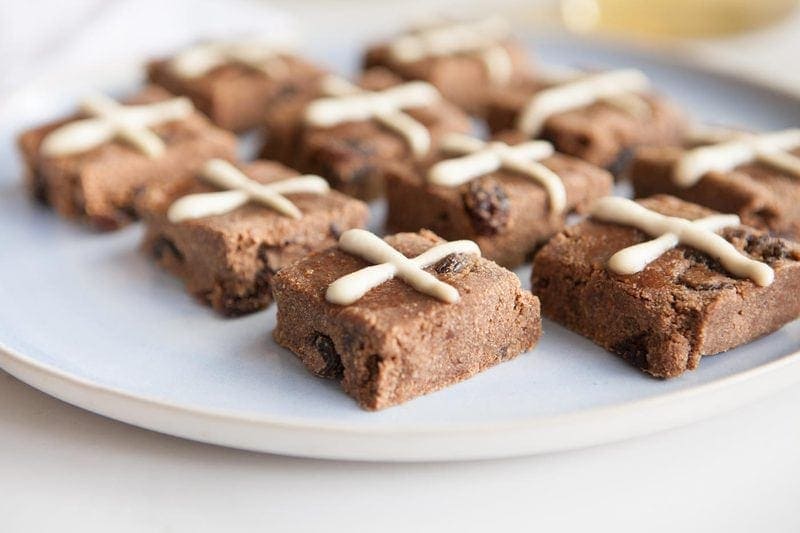 This recipe has been tried and tested a few times, and I’m really happy with it. As with last year, the general consensus amongst the guinea pigs (aka, the boys), was ‘more fruit!’. So, these are saturated with juicy sultanas.

The spice mix is just perfect and the cross is just a pretty basic lemony-cashew blend. You can totally make and eat these without dehydrating them, though, enjoying them fresh out of the raw oven like that is just so a-mazing. The best thing about them – aside from being incredibly quick to whip up – is that they keep really well. The Healthy Hot Cross Buns I made last year were fantastic but they really are better enjoyed fresh.

Now, if you’re more a chocolate person over fruit when it comes to Easter, pop back next week because I have the most indulgent (totally vegan totally healthy totally yummy) recipe just for you. 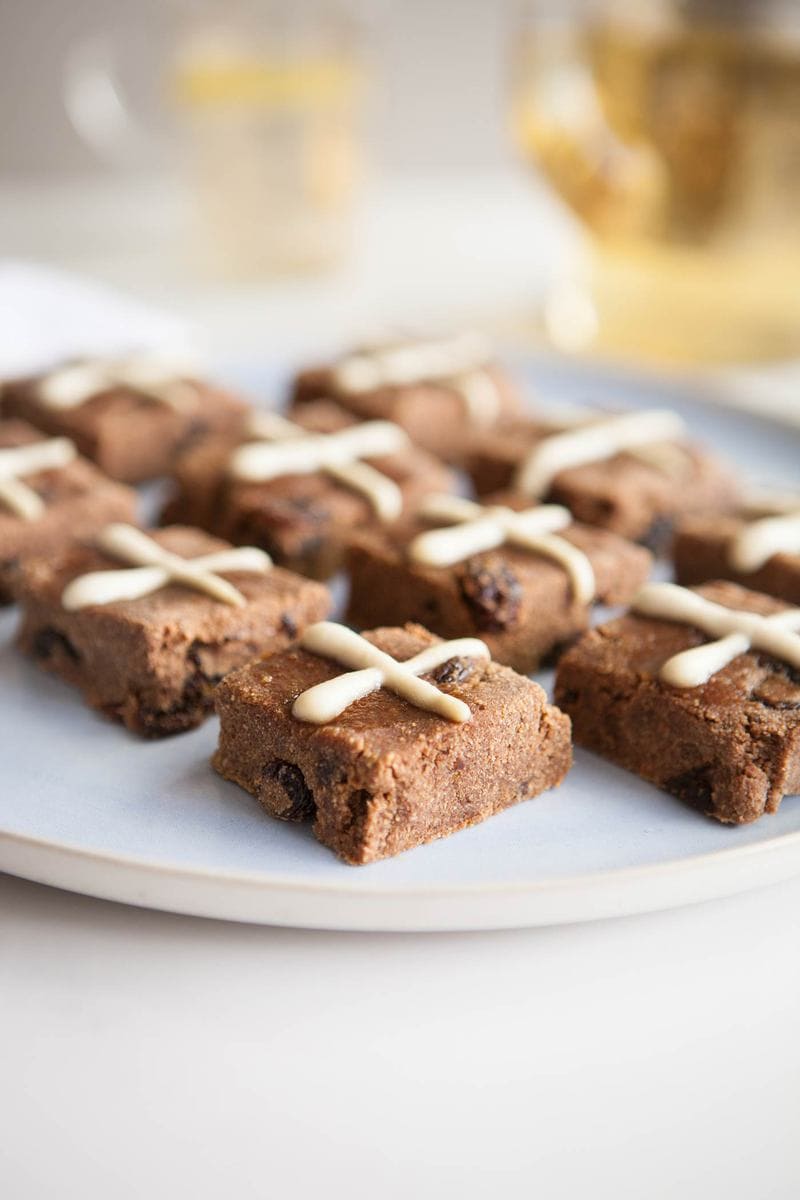 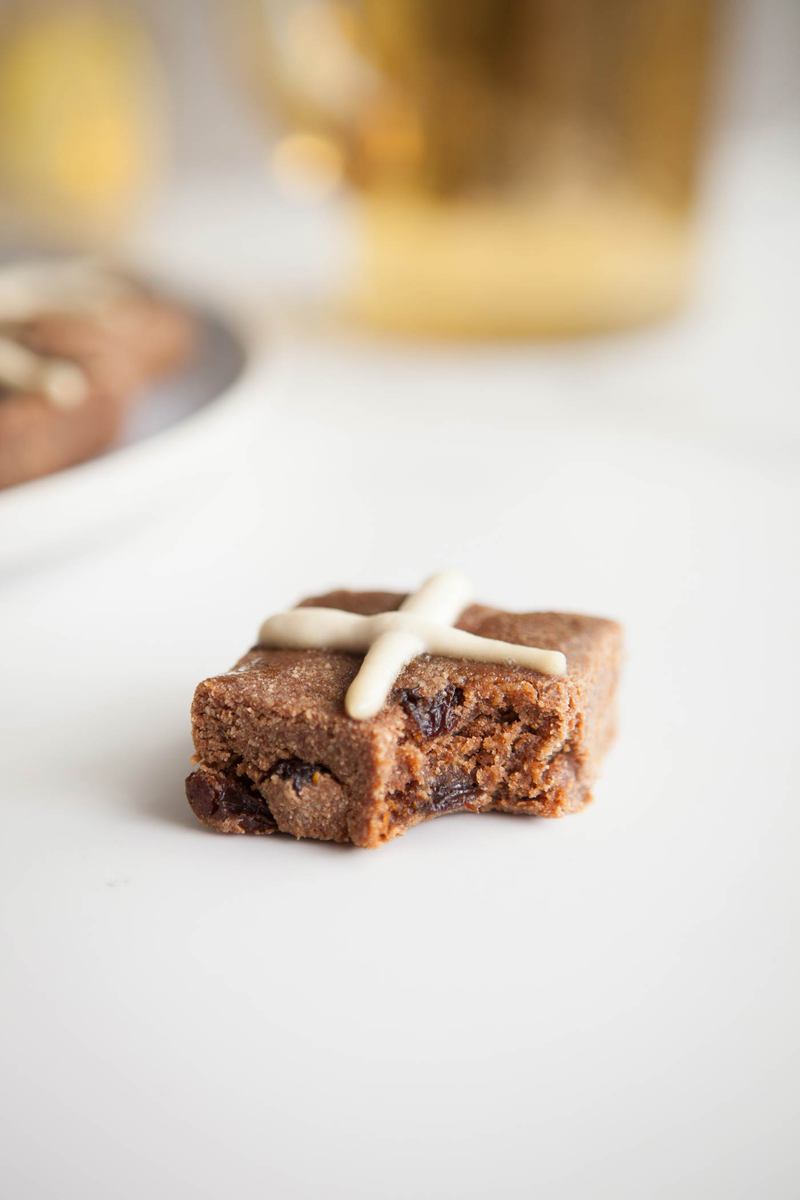 If you make and enjoy this recipe, please leave a rating below. And better yet – leave me a comment to tell me how you got on, or just say hi – I LOVE hearing from you. Follow me on Instagram, Facebook or Pinterest to see more of my everyday recipes and wellness tip. 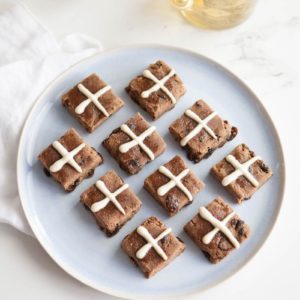 Calories: 177kcal
Tried this recipe?Let us know how it was! 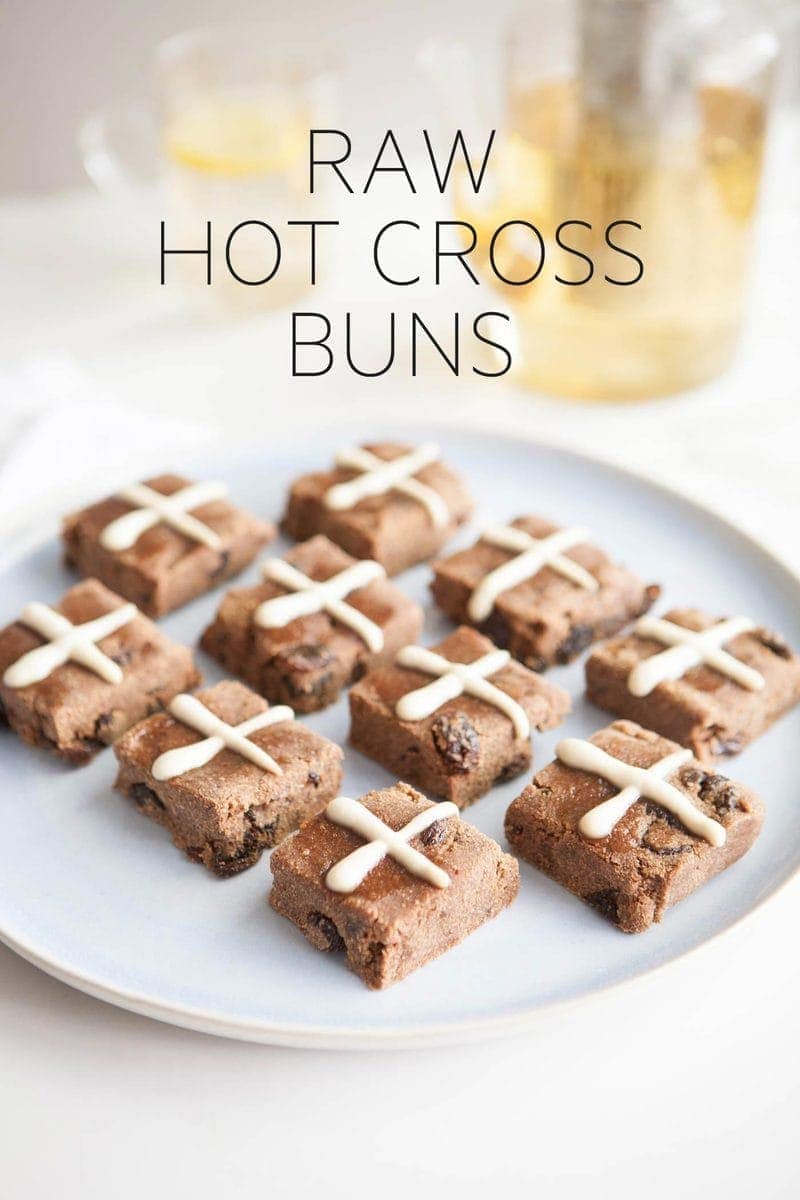 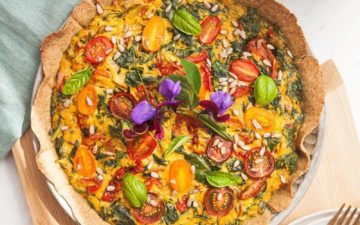 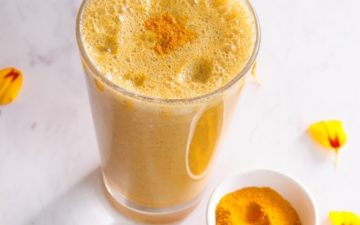 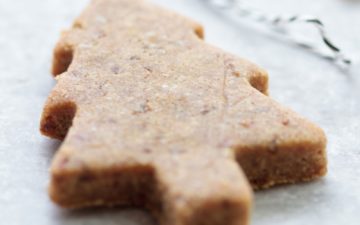 END_OF_DOCUMENT_TOKEN_TO_BE_REPLACED

This website uses cookies to improve your experience while you navigate through the website. Out of these cookies, the cookies that are categorized as necessary are stored on your browser as they are essential for the working of basic functionalities of the website. We also use third-party cookies that help us analyze and understand how you use this website. These cookies will be stored in your browser only with your consent. You also have the option to opt-out of these cookies. But opting out of some of these cookies may have an effect on your browsing experience.
Necessary Always Enabled
Necessary cookies are absolutely essential for the website to function properly. This category only includes cookies that ensures basic functionalities and security features of the website. These cookies do not store any personal information.
Non-necessary
Any cookies that may not be particularly necessary for the website to function and is used specifically to collect user personal data via analytics, ads, other embedded contents are termed as non-necessary cookies. It is mandatory to procure user consent prior to running these cookies on your website.
SAVE & ACCEPT
1.1K shares