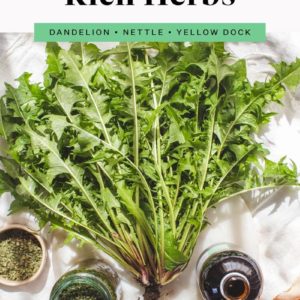 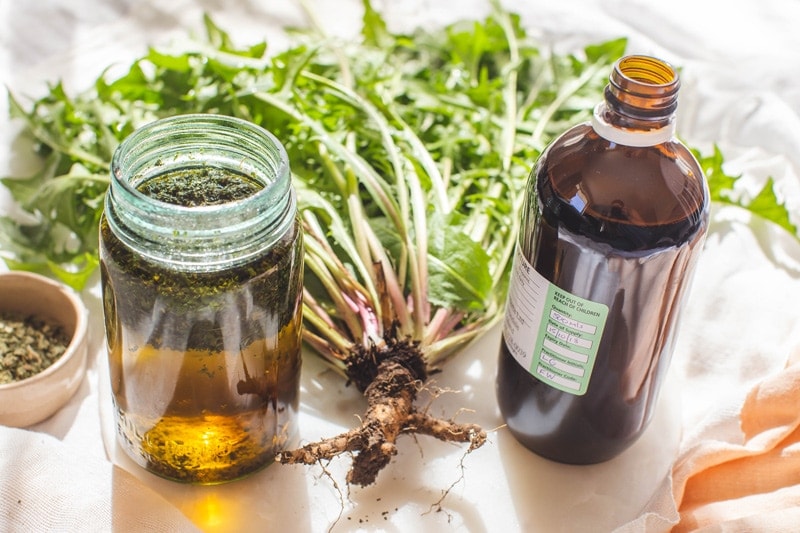 Last week we looked at some great plant-based sources of iron, so today I am sharing three of my favourite herbs. Then, later in the week, I will also share a simple, home made iron syrup, using the following herbs.

You will be happy to know that all of these are highly common – although I have to tell you, they are all weeds. Yes, weeds! Weeds are some of the most nutritious and nutrient dense botanicals were can get access to. Consider this, they will grow in the most desolate of waste lands, in places where there really isn’t much on offer. Yet still they thrive. Weeds are actually quite highly evolved, and send their taproots deep into the earth in order to access her minerals.

With this in mind, you can understand how underrated they actually are! Meet three of my favourites…

Lovely Yellow Dock is considered a weed in most countries, growing wildly along roadsides, forest edges, railway beds and car parks. If only people knew the value hidden in her leaves. The leaves are edible and can be used in soups or lightly steamed and have a slightly lemony taste. They can also be eaten raw in salads or in a green smoothie, although they have quite a high oxalic acid content, which binds with calcium in the body, inhibiting absorption. The simple way around this is to simply have a balanced diet. By rotating your greens (weeds, herbs and other foods rich in oxalic acid), oxalates will have a negligible effect on your overall health and wellbeing.

Traditionally used to cleanse the liver and the bowel. It has a gentle laxative effect, which makes it effective for treatment of constipation. It also stimulates the production of bile, which is released by the liver and stored in the gallbladder, and assists in the break down of fats into smaller, digestible pieces. For this reason it is often used in bitters formulas to stimulate digestion. Additionally, its effect on the liver can assist with jaundice.

But best of all, Yellow Dock has a rich iron content, so is particularly useful for treating anaemia. It combines well with Dandelion and Nettle, which are also fabulous sources of iron. Yellow Dock is also rich in phosphorus, calcium, and vitamins A and C.

Watch outs – it may cause dermatitis and in excess produces nausea. 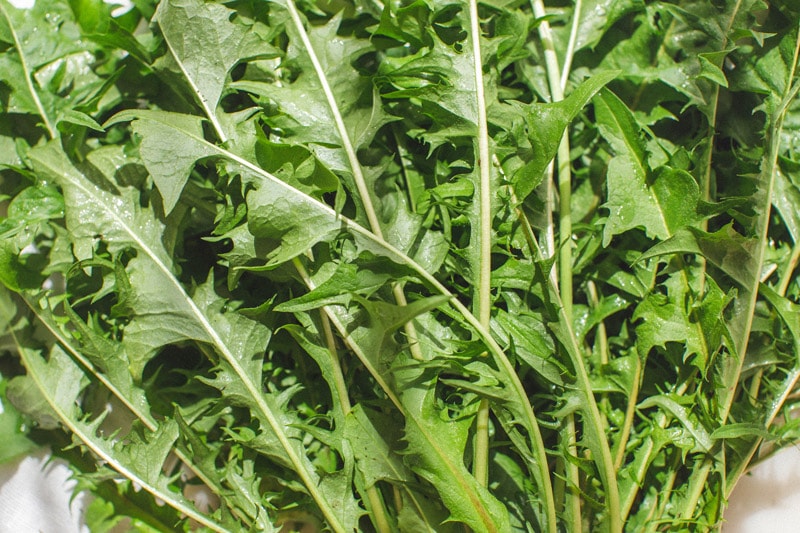 Dandelion is also a very common weed, found in meadows, lawns, and roadside, but is one of the Herbalist’s most treasured herbs. Another edible weed, you can have the leaves fresh in a salad. They have a slightly bitter and tangy taste. They can also be lightly steamed and served simply with a little sea salt, freshly ground pepper and olive oil. The root is roasted and ground and sold as a coffee alternative. The flowers can be used to make Dandelion wine.

As with Yellow Dock, Dandelion is a bitter herb so is used as a tonic for the liver and digestive system. In fact, it is considered one of the premiere herbs for the liver, gently clearing it of toxins. It too has a gentle laxative effect.

Dandelion is also traditionally used for skin conditions, as it cleanses the blood and tissues.

Dandelion is also a natural diuretic, which is useful for clearing the body of excess fluid. Because it has a rich potassium content, it is a balanced diuretic, replacing what the body loses.

Dandelion is an extremely nutrient dense herb. It is rich in vitamins and minerals. It contains vitamins B, C, D, and even more vitamin A than carrots.

It is also high in protein and choline – an essential nutrient that helps keep your cell membranes in tip top shape. It is a great source of inulin, a natural soluble dietary fibre, which promotes growth of good bacteria in the colon.

Lastly, it is indeed a wonderful source of iron. 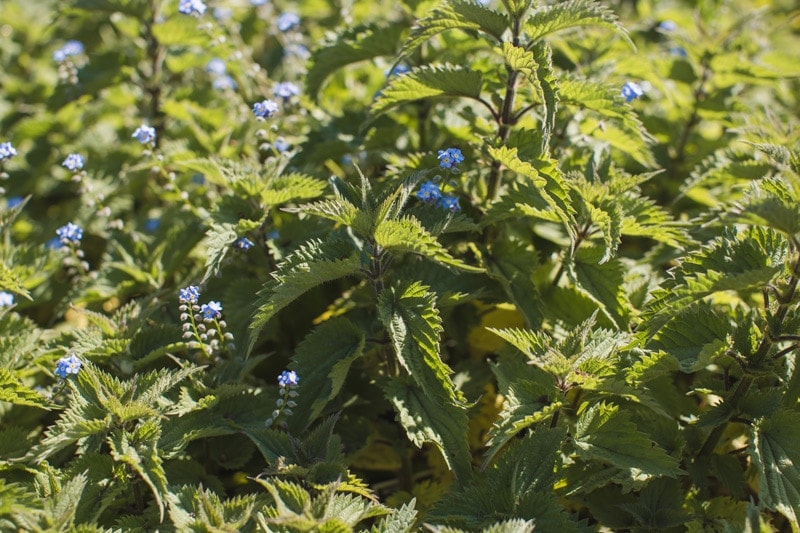 Once again, nettle is a common weed that loves to grow in waste land and along roadsides. One of my favourite herbs, nettle is incredibly tasty. You have to be careful when you pick it because it will sting you. But these stings are easily neutralised when you either blanch in hot water or blend. I love to add nettle to my smoothies. Another favourite way is to steam them well. They have a mild, creamy, nutty flavour. They make an absolutely divine tea. You may be able to find fresh nettle and other edible weeds at your local Farmer’s market.

Nettles are a tonic for the whole body, especially the blood, making them a girl’s best friend when in need of some PMS relief, and are also a great tonic for the genitourinary system.

Because nettles are cleansing for the blood, they are also fantastic for skin conditions, as the blood feeds the skin. Often used to clear eczema, and even in hair and scalp potions.

Nettles also have an astringent property. Astringent simply means ‘drawing together’ or ‘tightening’, so here we find use for them in nose bleeds.

Nettles are iron rich, but also have a high vitamin C content. The vitamin C aids in the absorption of the iron. Double win! They are also incredibly nutrient dense, and contain a wide array of vitamins and minerals. 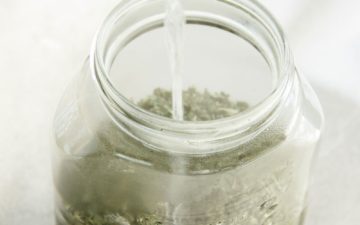 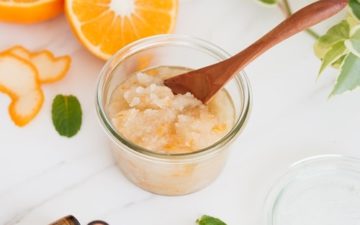 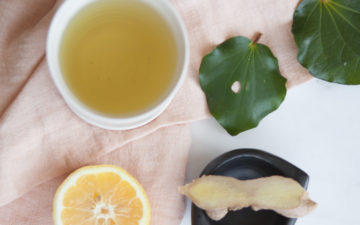 END_OF_DOCUMENT_TOKEN_TO_BE_REPLACED

This website uses cookies to improve your experience while you navigate through the website. Out of these cookies, the cookies that are categorized as necessary are stored on your browser as they are essential for the working of basic functionalities of the website. We also use third-party cookies that help us analyze and understand how you use this website. These cookies will be stored in your browser only with your consent. You also have the option to opt-out of these cookies. But opting out of some of these cookies may have an effect on your browsing experience.
Necessary Always Enabled
Necessary cookies are absolutely essential for the website to function properly. This category only includes cookies that ensures basic functionalities and security features of the website. These cookies do not store any personal information.
Non-necessary
Any cookies that may not be particularly necessary for the website to function and is used specifically to collect user personal data via analytics, ads, other embedded contents are termed as non-necessary cookies. It is mandatory to procure user consent prior to running these cookies on your website.
SAVE & ACCEPT
1.9K shares