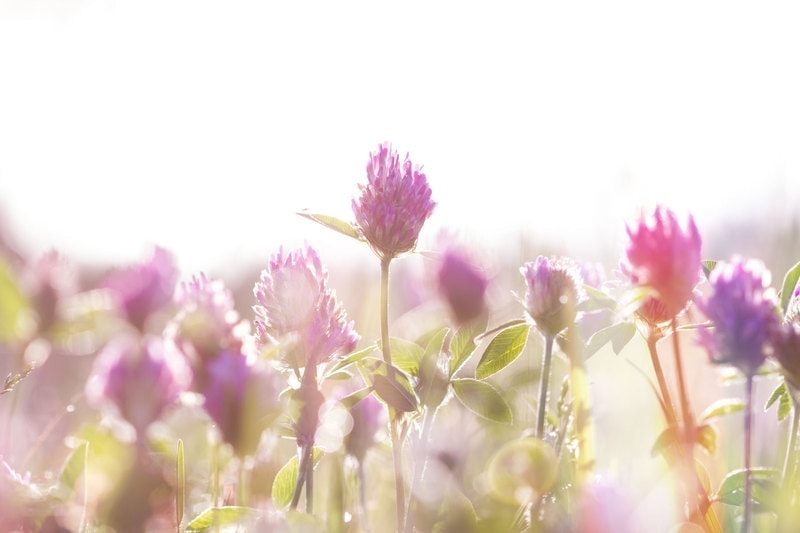 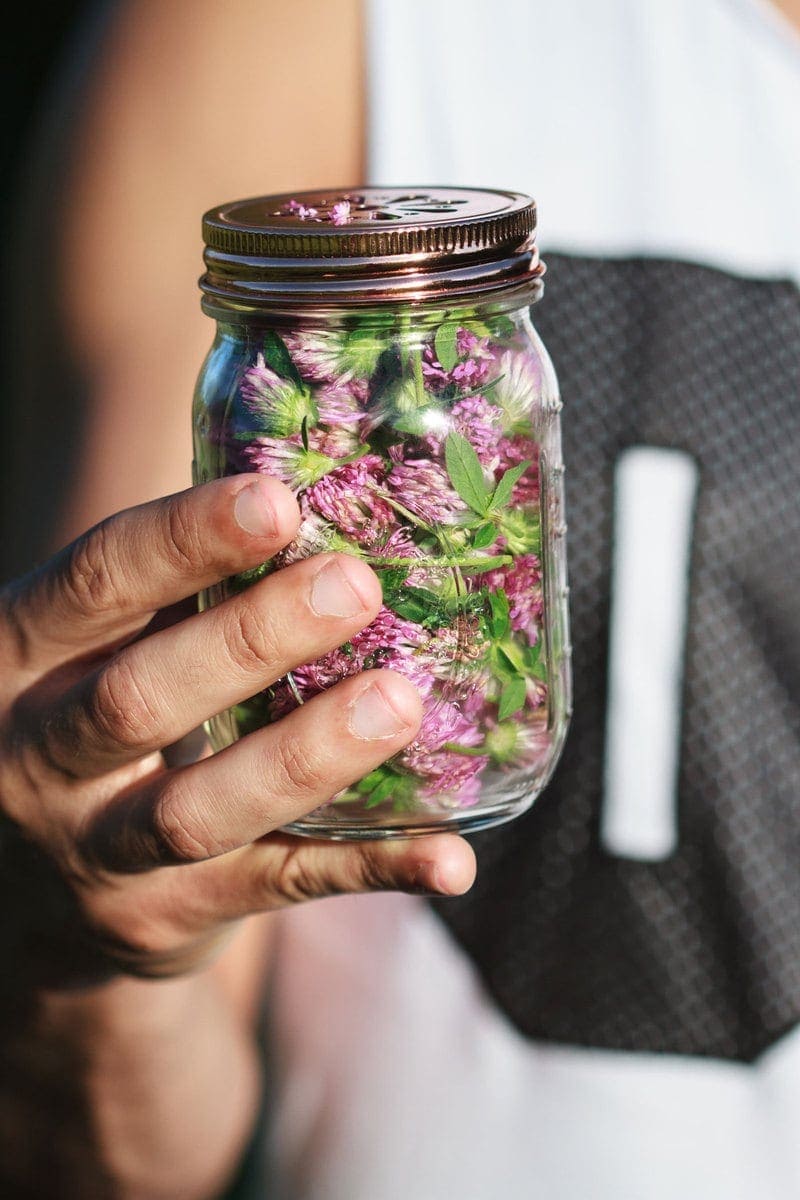 Only my hubby-to-be would ever agree to rolling out of bed (on his holiday) at the crack of dawn, to wander down to my secret spot, mason jar in hand, to forage and collect herbs for a medicine-making project of mine. Aww.

We must have looked such a site. Me lying in the grass taking pictures of red clover with the sun rising behind it, and him crouching down amongst the weeds carefully choosing the bestest clover heads for my infusion.

So whilst this is perhaps the simplest of remedies I’m sharing with you today – it’s actually a pretty special one.

This pretty little flower is a common weed you may have seen growing in un mown grass and in the green patches on sidewalks around the city. It’s actually a very special herbal remedy for women and for skin.

One of its actions is as a depurative (also referred to as an alterative). This is actually a very old, traditional Herbal Medicine term, and refers to the plant's ability to detoxify and assist in elimination – reducing the accumulation of metabolic wastes.

By getting the blood flowing and aiding elimination, you are able to clear skin conditions by moving the waste that builds up underneath the skin’s surface. This is what makes it such a beautiful remedy for chronic skin disorders such as psoriasis.

Red clover flowers differ from the regular, pale brown clover, though both are a favourite with the bees and make beautiful honey. When you forage for them, it is best to choose an area that hasn’t been sprayed. A tradition I like to follow, is to give a small offering to the plant and ask permission before harvesting, only taking what you need and no more. In the Native American Indian tradition, they would give a little tobacco – which is a sharing plant – such a sweet offering. The late spring and summer months are the perfect time to pick them.

In addition to purifying the blood, red clover was traditionally used to clear the respiratory system of mucous (due to its lymphatic and expectorant actions). It is also traditionally used for the treatment of menopause and hot flushes, and as an anti-cancer medicine (again, for its ability to detoxify and aid elimination)[1],[2].

Red clover is a great source of vitamins and minerals, an extremely nourishing plant.

The recipes below use fresh red clover flowers - but you should be able to find the dried flowers at a natural foods store, or from a herbal supplier such as Astral Herbs (Australia).

This recipe has a much longer steeping time than a regular tea (which many herbalists would actually refer to as an infusion) – as taught to me by my Herbal teacher on my Shamanic Herbal Apprenticeship.

You can read about this in full in my article on Nourishing Herbal Infusions here. 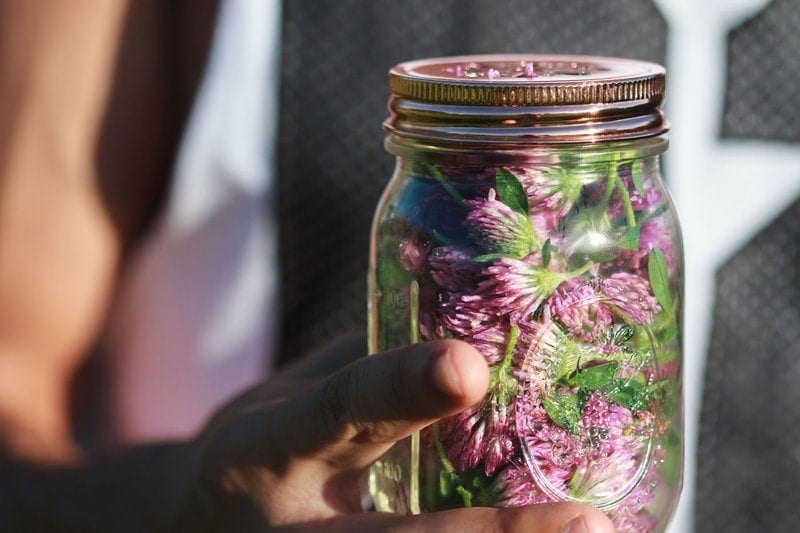 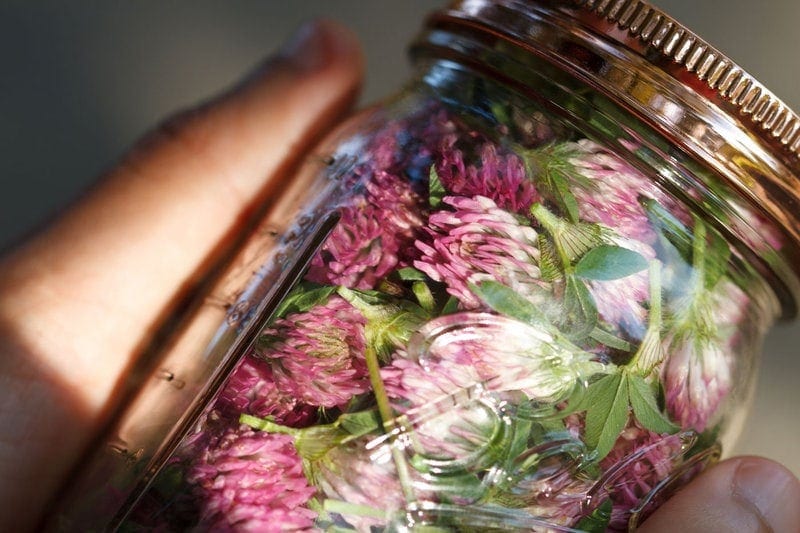 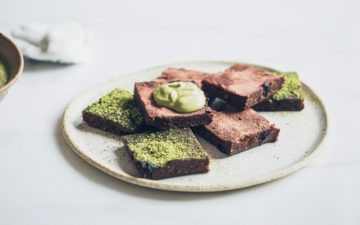 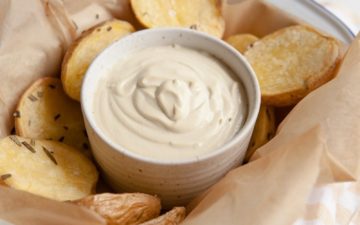 Creamy Vegan Aioli made with Cashews 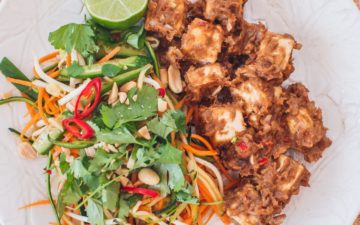 END_OF_DOCUMENT_TOKEN_TO_BE_REPLACED

This website uses cookies to improve your experience while you navigate through the website. Out of these cookies, the cookies that are categorized as necessary are stored on your browser as they are essential for the working of basic functionalities of the website. We also use third-party cookies that help us analyze and understand how you use this website. These cookies will be stored in your browser only with your consent. You also have the option to opt-out of these cookies. But opting out of some of these cookies may have an effect on your browsing experience.
Necessary Always Enabled
Necessary cookies are absolutely essential for the website to function properly. This category only includes cookies that ensures basic functionalities and security features of the website. These cookies do not store any personal information.
Non-necessary
Any cookies that may not be particularly necessary for the website to function and is used specifically to collect user personal data via analytics, ads, other embedded contents are termed as non-necessary cookies. It is mandatory to procure user consent prior to running these cookies on your website.
SAVE & ACCEPT
540 shares